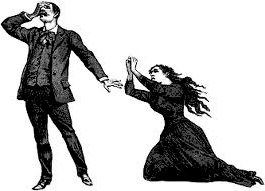 Happy first day of May!

In college, I took a course called “Writing Fiction & Poetry.” It was one of the first times I can remember actually exploring writing prompts and crafting short stories and then getting peer and professor feedback. The class was fun and challenging, and I learned a lot. I’ll never forget what my professor told me after reading one of my short stories titled “Broken.”

He called my story melodramatic.

Truthfully, until that point in my writing career, I had never given melodrama much thought–and I never imagined that anyone would say my writing was melodramatic. But every good writer worth his or her salt views constructive criticism as just that: constructive criticism. So I took a good look at my story and saw that yes, it was a bit melodramatic. After all, I had a character punching a mirror and then sliding to the floor in a puddle of tears. I guess I should have seen it coming.

Since then, I have tried to be more aware of when I am slipping from realistic action into melodrama, and as an editor I watch out for this in other’s writing as well.

Following are a few short tips for how to spot melodrama. Next week’s post will offer some tips for cutting melodrama. These tips are adapted from Jordan Rosenfeld’s book Make a Scene, which I mentioned in my post on good writing books to check out.

Feel free to leave any melodramatic tips or thoughts in the comments! (And yes, that sentence is phrased so it’s unclear whether I want you to leave tips on melodrama or tips that are themselves melodramatic.)

First, a definition of melodrama from my friend, Merriam-Webster dictionary:

Melodrama [noun]:
drama in which many exciting events happen
and the characters have very strong or exaggerated emotions
________________

The Traits of Melodrama

Can you think of any other traits of melodrama that I missed?
Have you ever been told that your writing is too melodramatic?